NB: This post discusses pregnancy loss. If that will upset or trigger you, please enjoy this photo of my cat instead. 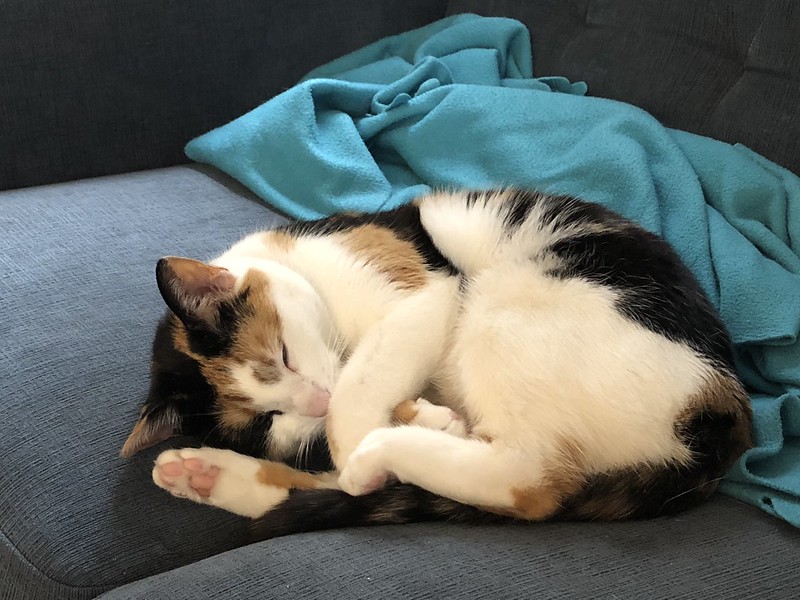 I wrote a while ago on my original blog about my missed miscarriage last fall. If you’re interested in all the gory details, I spared very little in writing that post because I firmly believe that pregnancy loss should be talked about and I felt up to writing about it at that point. But one thing I wasn’t prepared for was the feelings that would come up after getting pregnant again. At the time I wrote that post, I had just barely gotten my first period after my loss and wasn’t sure how I felt about trying again right away. I wanted to try again, but at the same time I was scared of having to go through that again.

As the months went on past that, we did start trying again, pretty much right away, and I found that the fear faded a little. I realized that I got through my miscarriage once and I could probably get through it again. But none of that prepared me for the level of fear that would bubble up again once I got pregnant again.

When I first got a positive test, I spent the first weekend convinced that it was going to end in an early loss. When that didn’t happen, I relaxed a little, but I made sure to schedule my first ultrasound for after my show closed, just in case. Just in case I got news that might make me not feel like going on stage the next weekend. I waited for the other shoe to drop. And I’ve kind of spent a lot of this pregnancy waiting for the other shoe to drop.

When the nausea hit me, early, fast, and hard, I was miserable, but also kind of relieved. It was much worse this time around. Dan even commented that he was glad I was so miserable because it was a sign that maybe things would be different this time.

And they were. I think I was holding my breath when the ultrasound tech started my scan the first time. When the screen showed a baby in my uterus, and then movement, and then a heartbeat, I cried tears of joy and relief. When I had my NT scan at 12 weeks, I felt the same way, and when the doctor first measured the heartbeat with Doppler later that week.

The ultrasound technician at my NT scan warned us that the scan would reassure me, but the fear would set back in eventually, and she wasn’t wrong. Now, at 16 weeks, with a doctor’s appointment later this week, I’m finding myself back in the mindspace of setting myself up to deal with potentially finding out that something has gone wrong.

I think the main thing I’ve realized about experiencing loss is that now I know what can happen, even if it’s not statistically common. By interacting with other women who’ve had losses, I did find support, but I also found out even more ways things could go wrong. I wish I didn’t know about these things, or at least I wish I could still rely on the statistics to reassure me. But I can’t.

I’m trying the best I can right now to just breathe and not look to a bleak future before it happens. I’ve started meditating a bit, and I’ve even let myself get excited about baby stuff a little. I wonder what will happen when I get to the point where I can feel the baby move, if that will help reassure me more. But for now, I know that I’ll be able to breathe a little easier after my appointment this week, if only for a little while.