Last week, I posted about my craving for waffles. Now, I anticipated this craving and stocked my freezer with some toaster waffles. And then I promptly forgot I had them when in the midst of a craving. I woke up one morning, decided I needed to make Belgian waffles. I told my husband I wanted waffles for breakfast and wandered downstairs while he was showering. When he came down, he saw that I’d taken up pretty much every available surface in the kitchen with my culinary endeavor. He stopped, momentarily struck speechless by how quickly I’d spread out, and then said “You had toaster waffles. Why did you make so many dishes?” I shrugged and said I wanted “real” waffles, but really, I’d completely forgotten about the waffles in the freezer. 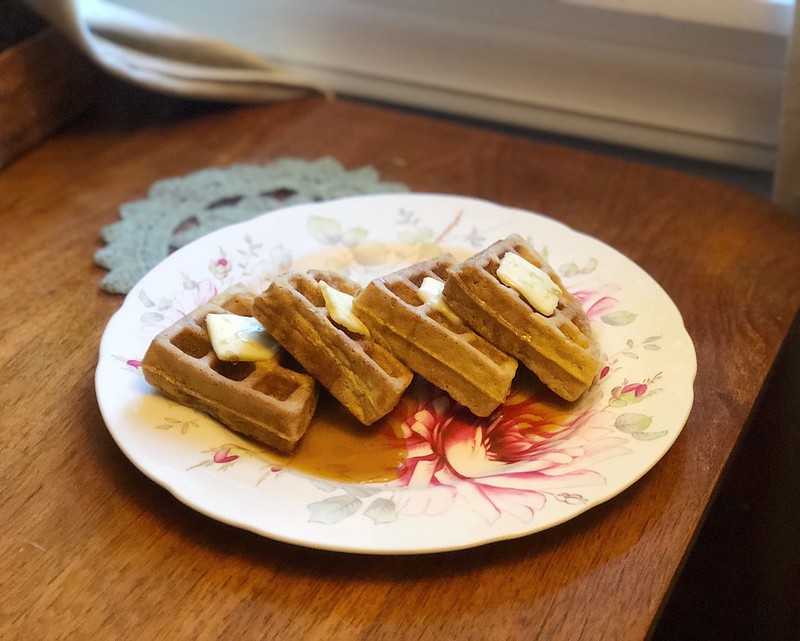 The good news is that now I have “real” waffles in the freezer because I made an entire batch of Belgian waffles so that I could eat one for breakfast (and maybe one an hour or so later when I was hungry again because pregnancy). So for the next couple of cravings, I can probably just heat up a waffle I made previously instead of making more dishes again. Assuming I remember I have them.

Now, if I was going to make waffles from scratch, I decided I wanted them to be sorta-healthy. So I pulled out my trusty Alton Brown waffle recipe, which uses a half-and-half mixture of whole wheat and white flours to increase the nutrition level a bit. Then, I used sprouted wheat flour as the wheat flour and high-extraction einkorn flour for the white flour because supposedly their healthier. Also, I have them in the pantry because I used them in a muffin recipe recently and actually they’re probably the freshest flours I own right now. Anyway, what resulted were delicious, light and crispy waffles. Here’s how I made them:

Note: I used New Barn Original Almond Milk, which is higher in fat than other brands of almond milk, and is lightly sweetened with maple syrup. If you use unsweetened almond milk, you may want to add a teaspoon or so of maple syrup to your batter.