The second week of Hypnobabies definitely delved a little more into the meat of the program. Week one was a solid introduction to both their style of guided meditation and the difference between relaxation and hypnosis. But week two really brought in more of the serious work on the actual hypnosis portion of the course. 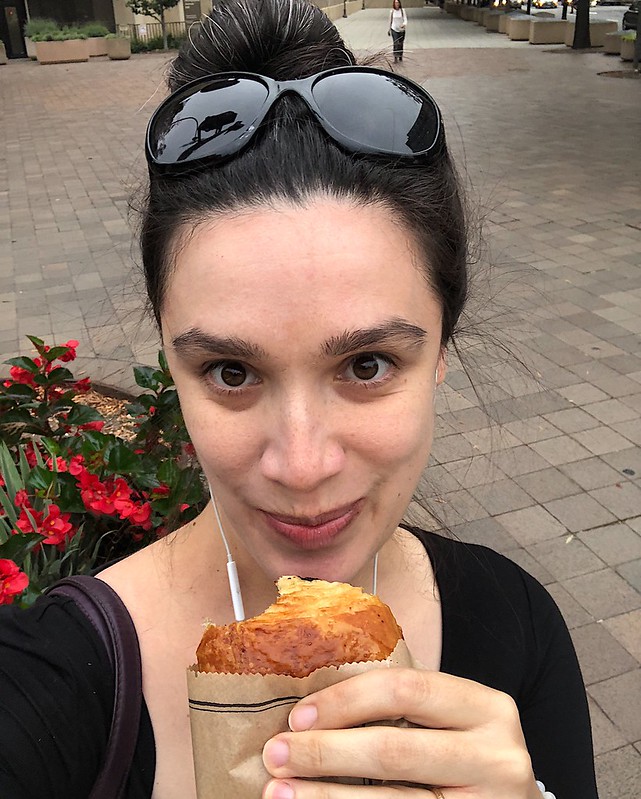 The weekly slides and reading were mostly about staying healthy in pregnancy. There was a little bit about nutrition, some of which I agreed with, but mostly presented in an innocuously vague manner. They do recommend you start tracking your protein intake, so I used the week to actually monitor my food intake. Interestingly enough, I discovered that, while I’m getting plenty of protein, I tend to eat fewer calories on days when I mostly stay home, which could be one of the reasons that I sometimes get a little dizzy on Sunday evenings. It’s actually been a nice motivator to remind myself to eat earlier and heartier on weekend mornings and (despite being sick) I felt better for it this weekend. I also found out that I could afford a couple more treats than I usually allow myself, hence the pain au chocolat selfie above!

They also give mild recommendations on exercise, mostly gentle stuff like yoga and walking, which are both backbones in my prenatal exercise routine. But they also provide recommendations on specific daily exercises to help prepare your body specifically for birthing. I don’t do the exercises every day, but most of them are exercises that are a staple in my barre and yoga workouts (I’ve just started adding some cat/cow stretches to my barre workout when I’m modifying the ab routine).

One thing I wanted to point out is that, as I said previously, this is not a short time commitment. Once again, the reading (slides and extra PDFs) took me about an hour to get through, and I’m a fast reader. The additional daily tracks you’re supposed to listen to are the “Joyful Pregnancy Affirmations” track (40 min.) and the “Finger-Drop Technique Practice” track (15 min.) daily, plus alternating between the “Learning Self-Hypnosis” track (40 min.) and the “Deepening Your Hypnosis” track (45 min.). So, altogether, the daily listening is between 95 and 100 minutes per day, although the 40-minute affirmations track can be listened to while you’re doing other things, and they do say that the hypnosis tracks can be listened to while you’re going to sleep (although I like to them at least once a week when I know I won’t doze off). So between work, going to the gym, and making dinner, I’ve sometimes struggled to find the time to listen to everything. I’m fortunate to have a private office and a full hour of lunch break, so I actually listened to my hypnosis tracks at my desk twice last week. It’s absolutely worth it (Saturday evening when I was feeling absolutely dismal, my hypnosis track was the only thing that helped my achiness all day), but it’s worth noting the time commitment. As far as the specific tracks go, here are my thoughts on the new tracks this week:

This is a practice track, which will apparently become a weekly thing from now on. You start with this track, which helps you develop the response to the hypnotic cue called the finger-drop. The idea is to train your mind and body to react to a conscious action (raising and dropping one finger) to trigger you to fall into deep hypnosis. After listening to the “Learning Self-Hypnosis” track, where you learn the full idea behind the hypnosis tool of the mental “lightswitch,” you use this short track to practice mentally turning your lightswitch off and falling into deep hypnosis easily. The idea is that you will eventually use this technique to fall into self-hypnosis at the drop of, well, a finger when you need to. It’s a really interesting idea and the only problem I’ve had is overthinking whether or not I should be practicing with both my right and left hands, or just use the hand that feels most natural to me.

This track introduces you to the concept of self-hypnosis and “hypno-anesthesia,” which is a state where your body is so completely relaxed that you can’t move (although it’s more like you don’t want to, rather than some sort of terrifying sleep paralysis). In the track, they introduce the idea of the mental “lightswitch,” which is visualized as a switch at the base of your skull that controls all the electrical impulses between your brain and the rest of your body. By visualizing this switch, you can visualize turning it off and switching off all impulses to the rest of your body. This way, you can be aware of your surroundings, but feel completely relaxed and relieved of all tension. It’s a very relaxing track to listen to, and is a good introduction to self-hypnosis. My only complaint is that this, and all the tracks, tend to rely on a lot of repetition, which I suppose has some basis in the practice of hypnosis that I just don’t understand yet. That said, I find myself skipping the first several minutes of this track because it seems like mostly introductory stuff that I only needed to hear once.

This track is one that you take with you beyond week two, and that I’ve heard women use during their actual birthing time. Rather than focusing primarily on teaching you a hypnotic cue or tool, this track primarily serves to send you to the deepest level of relaxation and hypnosis. After performing the finger-drop and putting yourself into hypnosis, you are led through a series of hypnotic suggestions to drop you deeper into relaxation. It kind of reminds me of Inception when they dive into deeper dream levels (in fact, I found myself visualizing being dropped on a beach at the deepest level of relaxation more than once). It is profoundly relaxing and very easy to fall asleep to. The script even allows for you to use the track to fall asleep at the end if you wish, instead of counting back up. They also teach you the hypnotic cue “Peace,” which is meant to help serve you both in birthing time and whenever you need a moment of relaxation. I will admit to using my “peace” cue a couple times during the week when I was feeling frazzled, too.

So those are my thoughts about week two, and the specific tracks introduced. My only complaints thusfar are the sometimes-lengthy introductions to each track. It would be nice if the introductory remarks were added as separate short tracks that you could choose to play before the main track or not, but it’s a relatively minor complaint. I’ve also started playing with my posture and location while listening to the tracks. I realized that I won’t be having my birthing time upstairs in my bed (I wouldn’t want to get to a point where I don’t feel safe descending the stairs!) so I’ve tried to spend more time in my living room. I even borrowed a yoga ball to try sitting on for some of my sessions. But now that I’m two weeks in, I’m starting to feel even more confident about my preparations for birthing and my pregnancy in general.