Well, I’m halfway through and this week really got into the meat of childbirth and childbirth hypnosis. The readings focused mostly on interventions during birth while the tracks introduced the idea of hypno-anesthesia and eyes-open hypnosis. Plus, I found a great new tool for listening to my hypnosis tracks. 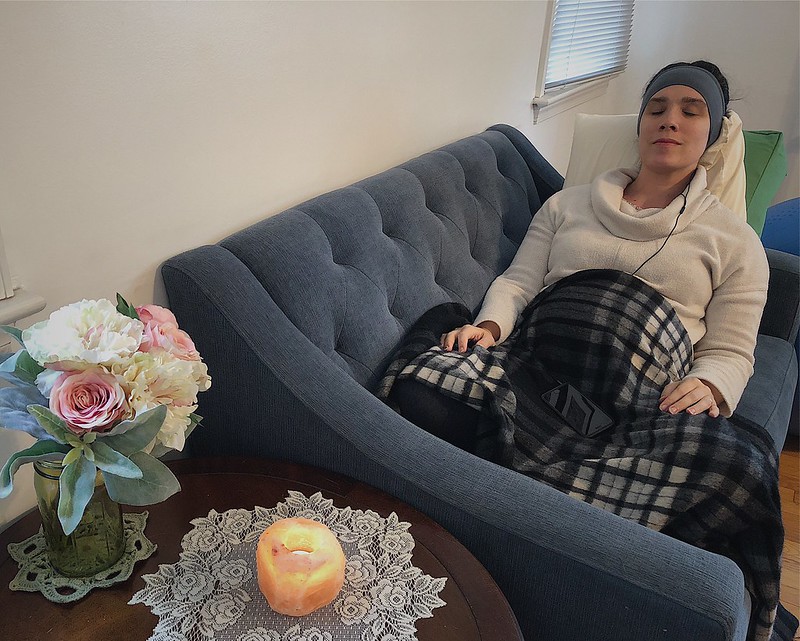 That’s me, listening to my hypnosis track with the soft peach glow of a candle in a pink salt candle holder as a visual focus, using my new ZenBand headphones from Blooming Wellness. ZenBand headphones are a set of flat headphones housed in a soft headband so that you can fully relax while listening to your tracks through headphones. I had noticed that my ears would start to hurt when I listened to earbuds, and these were actually recommended on the Hypnobabies website, so I figured I’d give them a try. The owner of the company is very responsive (there was a glitch and I didn’t get my confirmation email right away) and they shipped super fast. They definitely make relaxing while listening easier. (NB: I paid for these myself and have not been given any incentive to review them).

Now, on to the course itself this week. As I mentioned, the course reading was mostly about interventions during birth. Of course, it’s very biased towards “natural” or unmedicated childbirth, but I expect no less from pretty much any childbirth class being offered outside of an actual hospital. And, frankly, the whole reason I’m taking the course is to learn about alternatives to conventional hospital interventions. So I’m not bothered by the emphasis on the drawbacks of epidural pain relief, though I was impressed that they didn’t use some of the most obvious scare tactics. And, at the end of the day, the Hypnobabies course does seem to value the mother’s choice over any one philosophy. As the affirmations say, all routes your birthing takes are valid and good. Ultimately, they want mothers to be comfortable with any direction their birthing can take so they can maintain relaxation.

The tracks focused on hypno-anesthesia more than previous weeks, which I’ll admit was a stumbling block for me initially. Dan had made a comment that while he was open to the general concept of self-hypnosis, he thought the term “hypno-anesthesia” was corny. And I see his point. But through the reading and the tracks this week, I’ve come to realize that they’re using that term for a specific reason. The program is about using your mind to feel as though you’ve been anesthetized in some way, rather than just trying to give you mental tools to overcome pain. So, in that context, the term makes sense.

This track introduces you to the idea of hypno-anesthesia and helps you feel how it manifests in your body, as well as introducing the idea of eyes-open hypnosis. In previous weeks, you learn about your mental lightswitch; this week, you learn that it’s a three-phase switch — it can be “on,” “off,” or in the “center.” I found this particularly useful as a visualization because I used a lot of three-phase switches in the lab and I even liked the comparison to electronics when they talk about the signal being filtered when your lightswitch is in “center.” I really liked this track and I’m finding it easier and easier to drop into hypnosis as the weeks go on.

This track is a practice track to help you practice turning from “on” to “off” to “center” and practice being in hypnosis while your eyes are open and you can move around. It includes five practice sessions and takes about twenty minutes. It’s a nice practice. I never tried practicing without the track this week, so I’m curious if it works as well without the recording, but oddly enough I found it occasionally difficult to stay awake during this track. For some reason, when I’m in “center,” I find it hard to keep my eyes open and not just go back to “off.” It’s possible that had something to do with the lack of sleep I’ve faced over the last week, though. Who knows.

So that’s my weekly progress with the Hypnobabies course. I’m more than halfway through the main course and starting to feel more confident about birth with every week that goes by. Join me in the coming weeks to find out how the rest of the program went for me.