So while this is largely a blog about my experience going through pregnancy, so far, parenting is going to be a partnership for us. And I’ve mentioned my husband, Dan, both in the “About” section of this website, and in posts when he comes up. But I thought I’d feature him a little more since he really has been a true partner throughout my pregnancy, and I expect will continue to be a true partner as I go through childbirth and parenting. 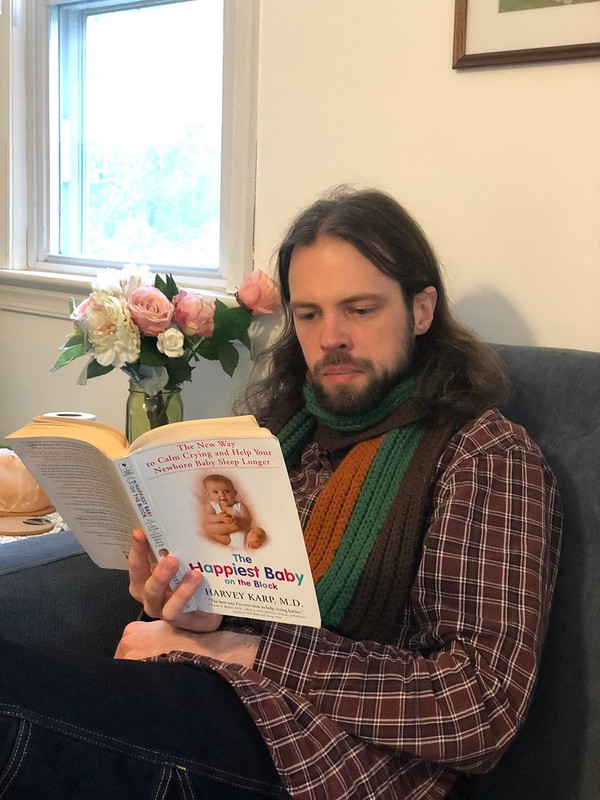 I’ve found an enormous amount of support and help as I’ve gone through trying to conceive, pregnancy loss, and pregnancy through the various subreddits of which I am a member on Reddit. And as I’ve gone through the last almost two years since we first started making plans for children, I’ve noticed that a lot of women complain about their partners. First, their partners don’t want children as much as they do. Then their partners don’t appreciate what they go through to determine when they’re fertile. Then, they don’t understand pregnancy symptoms or loss. Some partners seem to think that pregnancy symptoms are an exaggeration or that all pregnancies are the same, so if they’ve known one person who was pregnant, they know how their partner is going to react.

And this is where Dan seems to rise above much of the crowd: Through everything, he listens to me and believes me. It helps that he actually wanted kids more than I did at first, but he was supportive while I figured out what I wanted, rather than pressuring me. And then from there, he’s taken in all the information I’ve given to him, or sought it out for himself. He trusts my research and believes me when I tell him something about my body. And he’s not squeamish about bodies. I mean, he’s the one who had to go buy extra-absorbent pads during my miscarriage and incontinence pads when pregnancy made me start peeing myself.

This really showed itself in the first trimester of this pregnancy, though. I got hit hard with nausea, and he never complained about the fact that I could barely do anything outside of meet my professional obligations. He would let me come home and flop on the sofa rather than make dinner. He made one of the three dinners I could actually eat, and made sure not to eat anything that smelled bad to me. Heck, when one of his video games made me throw up, he never played it again. He took care of me, in all senses of the word. And he never expected any particularly praise or adulation for it. It was just what you do.

Luckily for both of us, my nausea faded as I moved into the second trimester and I’ve mostly been able to pick up my standard duties around the house. I’ve even started joining him in nesting (he got bit by the nesting bug basically as soon as I had a positive test and has been cleaning, organizing, and putting things together for months). And I cook most nights now. But he still supports me, mostly by picking up things that fall on the floor, or taking things up and down the stairs when I forget them. He does all our laundry, since our basement stairs are a bit nerve-wracking, even without the balance challenges of a growing belly (plus, I can’t actually bend over to pull clothes out of our top-loading washer!).

And he’s continued to take in all the information. He’s read The Birth Partner and uses what he’s learned to connect with me about preparation for childbirth. When we packed our hospital bags, he pulled out the book to double-check things we might not have thought of, like a pair of swim trunks for him in case he wants to get in the shower with me to help me labor. And he’s continued, reading the childcare books that I’ve read, so that we’re on the same page. He reminds me to do my Hypnobabies exercises.

So I guess I wanted to take some space here to, yes, brag about my husband. He deserves it, and I think the rest of the world deserves a bit of praise for a husband of a pregnant lady because partners and coparents can be the butt of so many jokes about men falling short. But despite the fact that we both annoy each other on a regular basis, he’s one of the good ones.

3 thoughts on “An Ode to the Other Half, Part One: Pregnancy Partner”