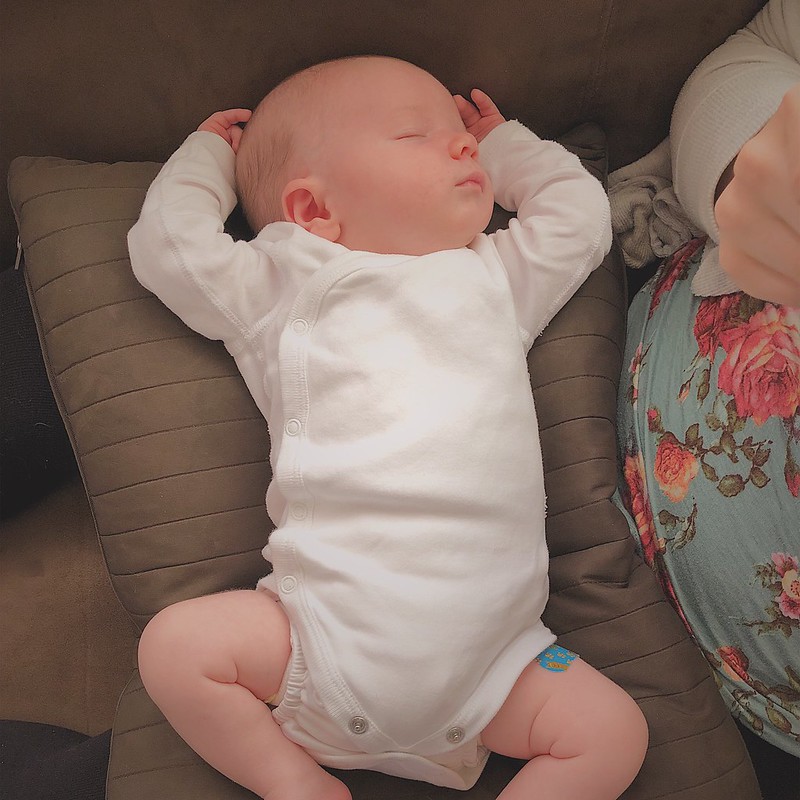 Elliot is one month old today! And what a month it’s been.

Well, I was feeling really discouraged because every time I started feeling a little better, I’d be a little more active, and then suffer a setback and feel like I could barely move. But around last Thursday or Friday I realized that I actually felt much better. I’ve actually started wearing clothing with a waistband again! I’d been in nightgowns, robes, and maxi dresses for most of the month, so wearing a skirt was a big step. And today, I wore leggings to our pediatrician appointment, which is the closest to pants I’ve gotten in a month.

But I’m still managing to overdo it. I think it comes from being a pretty active person during my pregnancy. It’s hard to grasp that I was five times more able at 40 weeks pregnant than I am now, without the belly or all the extra weight. I’ve been experimenting more with babywearing because my arms get tired carrying him and Elliot likes to be walked around. I’ve come to the realization that the stretchy wrap is going to have to wait until I’m a little more healed because I’m having back pain after a couple days in a row of wearing it for a bit. But the ring sling seems to work better, probably because it keeps the baby weight distributed higher and doesn’t go around my middle at all.

This week marks the last week that Dan will be staying home, so I need to take some time now to try to become more independent with Elliot. I’ve started doing a little more at night, although I still need to make sure I’m standing and being careful when lifting El in and out of his bassinet, rather than being able to just grab him while sitting in bed. But we generally do a diaper change when we feed him at night anyway, so once I take over more of the overnight work, I’ll have to get up anyway.

I still haven’t ventured out of the house except for doctors’ appointments, although we have some appointments to tour daycare centers later this week, which should be interesting. I’m hoping I can keep El in the ring sling to minimize his exposure to germs (although I doubt it’s much more risky than the waiting room at the pediatrician). And eventually, I will get out to take a walk in the neighborhood, even if it’s just around the block.

Still growing. At his checkup this morning, he’s still firmly tracking the 45th percentile for weight, despite the fact that he’s been feeding for less and less time. I guess he’s just very efficient at nursing. He also got a shot, which he did not like, but he got over. He did spend the first bit of the car ride home looking grumpy in his car seat, but he fell asleep and wasn’t any worse for the wear.

He’s also started focusing on objects and faces. He looks at us from further away, and will even pay attention to books and toys. And he’s started smiling at people and things. I picked up a stuffed cow toy to show him during tummy time (because it’s black and white and high contrast) and he broke out in a huge grim when he saw it. He’s also started smiling at us when we smile or talk to him. It’s really exciting because it feels like he’s becoming more engaged with the world.

We’ve started getting him toys and showing him some of the (many) books we’ve received as gifts. I got a baby gym frame to hang things from and some Montessori mobiles. The gym hasn’t arrived yet, but I experimented with holding up the Munari mobile for him today and he was entranced for five minutes.

Obviously, we’re still in the eat-poop-sleep-repeat phase of newbornhood, but it’s really cool to see the occasional glimpses of the baby that is to come. Oh and he officially weighs more than the cat.

4 thoughts on “Postpartum Diaries: One Month”