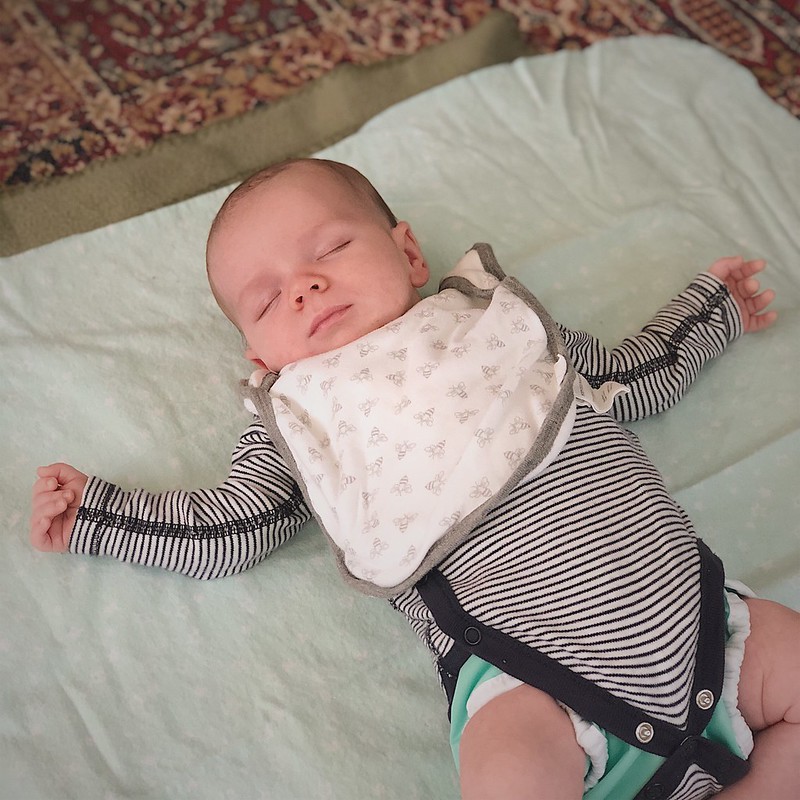 Officially, six weeks marks the end of the “postpartum recovery period,” according to my doctor and short-term disability (actually I get a little longer because I had a c-section). And, honestly, I can kind of see why. It’s been a good two weeks and Elliot is continuing to develop and hit new milestones. But really, I prefer the idea of “the fourth trimester” that extends up to 12-14 weeks postpartum. And since I’m taking 16 weeks of maternity leave, I have plenty more time to spend recovering and getting to know El before returning to work.

Actually, pretty good. This past Tuesday, I woke up and for the first time since the birth, I felt no pain in my body. Of course, that’s not a constant thing, but I’m starting to have longer and longer stretches of feeling good. When I got over my first trimester nausea while pregnant, I described it as feeling like I had bad days while mostly feeling good as opposed to good days while mostly feeling bad. I think I’m getting to that point.

Last weekend, I went for a walk for the first time since the birth. I discovered that I can put El in the ring sling and walk for a mile or two with no problem. It was particularly helpful because I found a therapist within walking distance who had an appointment available. You see, with my history of anxiety and depression, I knew I was at risk of postpartum depression. And when El’s pediatrician suggested I discuss it with my own doctors after scoring my EPDS assessment, I decided to make an appointment.

The therapist was lovely and had no problem with me bringing El to the appointment and wearing him while we chatted. Plus, I got to see my acupuncturist because they work out of the same center! And since the therapist started out as a yoga teacher (she went back to school to get a degree because her yoga students kept seeking her out for help she wasn’t qualified to give and she wanted to be able to help), she also had some suggestions for yoga classes I could try.

But being active again has helped my mindset more than anything. Being able to get out of the house and not worry about being in pain later is wonderful. Now that I’ve officially been cleared by my doctor (I had my six-week postpartum checkup a couple days ago) for returning to normal activity, maybe I’ll try to get back into my yoga routine, albeit gently. I’m definitely not going to be going back to barre class anytime soon, but at least I can see that going back to barre is in my future, which was honestly a bit tough the last few weeks, as sore as I was.

He’s growing and developing and having a great time. He’s definitely starting to spend more time awake for reasons other than needing to be fed or changed. We can actually play together, kind of. I bought some toys, including a set of Montessori-designed mobiles to help engage him during his awake time, and I also brought down a mirror from our bathroom. Plus, he has a great library of picture books from our friends and family (especially Dan’s mother). The favorites right now are the Black and White series by Tana Hoban, which have silhouettes of objects, either black on white or white on black, to be more visible to a baby’s sight while he’s still primarily seeing contrasts. But as he develops, we have lots of other books to share with him.

I’ve also started reading to him from books. I’ve read a couple Beatrix Potter stories to him, as well as some of my favorite fairy tales from the storybooks I bought for Kindle. While they don’t have as many pictures and he doesn’t necessarily understand the words, he seems to enjoy listening to me read them. He definitely has started responding to our voices. During the day when Dan is at work, I can calm him down by holding him and singing to him more easily than just rocking him.

But probably the most exciting new development is that El has definitely started smiling. He smiles in response to us smiling at him and when he sees certain things. He gave a huge smile at a black-and-white cow toy that a family member gave us for him, so we’ve decided that’s his favorite toy. And he definitely smiles for his mumma and daddy. No matter how frazzled or tired or sore I might be, his smiles warm my heart. Dan says that he feels like he can’t even remember what it was like to not have him around most of the time, and I kind of agree.