In this series, I’m giving my partner, Dan, his due as a fantastic partner at all stages of our journey to parenthood. Today, I’m going to talk a little about how he prepared for and participated in the birth of our child. I can honestly say that Elliot’s birth would not have been the largely positive experience that it was without Dan’s help. 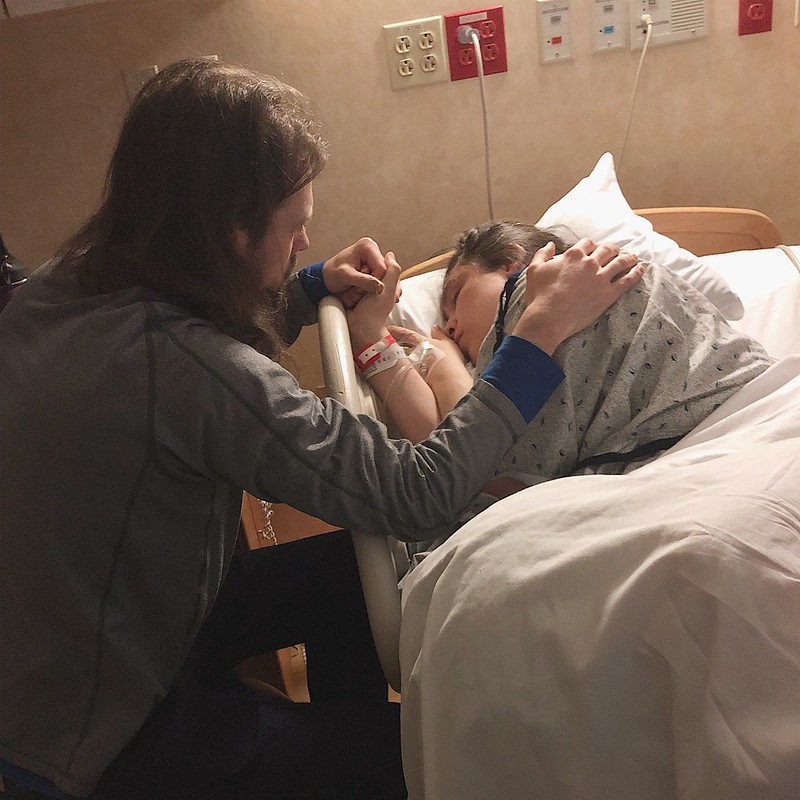 I’ve already told the story of Elliot’s birth and how I used my Hypnobabies techniques to keep calm and mostly comfortable during labor, especially before getting an epidural. I’ve also talked about how my first epidural started failing on one side because it was improperly placed and I had to have it redone while experiencing the height of pitocin contractions. But that’s the middle. Let’s start at the beginning.

First of all, though he was dubious about its effectiveness, Dan was always willing to participate in the Hypnobabies training. He took to the scripts and the cues right away, and I felt confident that he would be able to help, which made the anticipation of labor less scary. We checked into the hospital at 4pm the day of my induction and he stayed with me for the entirety of my hospital stay, which was almost 36 hours of labor, a c-section, and four additional days, sleeping on couches and staying up all night to soothe the baby so I could rest and recuperate as much as possible.

When we first got into the perinatal room, he helped figure out the TV options while I chatted with the nurse, and later on, he made sure that I could comfortably eat while mostly stuck in bed because of the monitors. Other than the time he spent sleeping the first night (I was pretty oblivious to my increasing contractions while on Cytotec, so I let him sleep as much as he could), he was engaged in the process and made sure to touch base with the nurses to know what was going on. He also was in charge of bringing my cold snacks to the nurses’ station to get them refrigerated, and then fetching gelatin and broth for me later on. I ate a lot of gelatin after we moved to labor and delivery.

But Dan truly started to shine when my contractions became more intense on pitocin. I had a private conversation with him that I was thinking I should get an epidural before I mentioned it to anyone else, and he supported me, while also encouraging me to wait until I talked to the doctor and the doula again, so that I didn’t regret getting it too early. When I did finally decide it was time for the epidural, he was right there with me, helping me relax through the contractions while I had to sit up for the anesthesiologist.

And when that epidural failed and I didn’t think I could keep going on, he was right there with me. I’m so glad our doula was able to snap the picture above of him comforting me through what would turn out to be the worst part of my labor experience. When I had to sit up for the second epidural placement, he was right there with me, helping me with relaxation cues to help me through the contractions while staying still for the epidural. I honestly don’t know if I would have been able to do it without him.

Eventually, we decided that it was time to move to the c-section, and I was so glad they allowed him in with me. I had to go in first, to get prepped, and then they showed him in. I was having really bad shakes from the spinal and it was making me anxious, which made me shake even worse. As soon as Dan came in and sat next to me, he started using Hypnobabies cues and some tricks the doula showed him to help me relax. Even though he claims it didn’t look like it made a difference, I felt much more relaxed and felt like I was shaking less.

Once Elliot came out (greeting the world with a fountain of urine!), Dan was the one to cut the cord and held him the rest of the time the doctors were finishing up. And once I was back in recovery, doing skin-to-skin time, Dan and my nurse made sure to watch us so that I didn’t have to worry about feeling drowsy from the effects of the anesthetic (and over 36 hours of labor and surgery with very little sleep!).

Throughout our hospital stay and the weeks after, he was the one who made my recovery possible. When I had trouble picking up Elliot because of my incision, he reminded me that most people who have abdominal surgery are told not to lift anything, rather than “nothing heavier than the baby,” so that as long as I had him to help, he would do the lifting. Every night when Elliot woke up to nurse, Dan was right there to pick him up out of the bassinet and hand him to me. Sometimes, Dan is better at soothing him to sleep than I am!

His quiet resilience and willingness to help with everything that was possible for him to do made it possible for me to rest and recover from my surgery, while his emotional support has helped me through some of the mentally toughest moments I’ve had. I feel lucky to have such good support and know Elliot feels lucky to have such a good dad.

3 thoughts on “An Ode to the Other Half, Part Two: Birth Partner”