So even though I had an unplanned c-section after almost 36 hours after the beginning of my induction, including 14 hours of pitocin, I probably had an easier time of recovery than a lot of unplanned c-sections because I never tried to push, so I had pretty much no perineal damage. That said, recovering from a c-section is never easy, and I thought I’d share a little bit about my recovery, and the things I found absolutely essential while recovering. 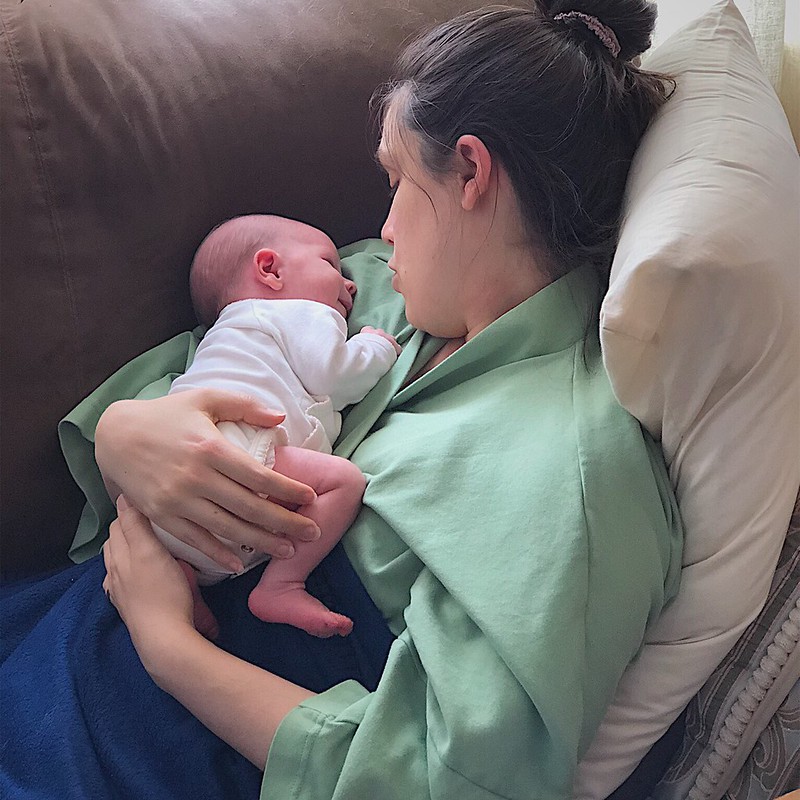 Of course everyone is different and every recovery is different. It’s my hope to help other women facing c-section see that it’s not the end of the world, and while recovery may be rough, it’s not impossible. If a c-section is what your body and baby need, you shouldn’t feel guilty about it. And remember that you just went through surgery; it’s okay to need help. This was particularly difficult for me because I was so active before and throughout my pregnancy. To just be able to lay on the couch all day and not do anything more strenuous than nurse my baby was a big shift, both physically and mentally.

One thing that helped immensely was some perspective from my husband. About a week after we went home from the hospital, I woke up in the middle of the night with terrible abdominal cramping. Worried that something was wrong, I went in to the doctor to get checked out. She said that I’d strained a muscle. Strained a muscle? I thought. How, exactly did I do that when I’d been doing nothing but lying in bed? Well, from the location of the strain, I realized I’d probably strained it twisting over to the side to pick up Elliot from his bassinet to feed him. Which was disheartening to say the least. Until Dan reminded me that most people who have abdominal surgery are told not to lift anything, rather than “nothing heavier than the baby,” so it made sense that even lifting the baby could cause problems.

My number one c-section recovery essential is a supportive partner. In my case, I was lucky that my husband was not only able to take off work for a month, but willing to stay away from his job for that long. I would say, at the very least, you should plan on someone being around to help you all the time for the first two weeks, until you know how your body is going to heal. I spent all my time laying in bed or on the couch, so I needed Dan to do pretty much everything else. I fed Elliot, but Dan fed the two adults. He did all the laundry. He kept me hydrated. He rocked, burped, and changed Elliot. Heck, when Elliot was still on formula supplements, Dan fed him most of his formula supplements. He made sure that all I had to think about was breastfeeding and recovering.

One of my biggest regrets is that I didn’t buy this robe (which I’m wearing in the picture above) sooner. It’s not cheap, but it’s fantastic. It’s soft, thick, comfortable, and the belt is attached so you can’t lose it in the wash. I came home from the hospital with a belly the size it was at five months pregnant, and an incredibly sensitive lower abdomen. Wearing real clothes was out of the question for a while, and breastfeeding meant I needed frequent easy access in the front. This robe over a nursing bra, and some thick socks was my uniform for at least a week.

The first few weeks of my recovery, I couldn’t stand wearing anything with a waistband. Wearing underwear was bad enough, but even leggings or a jersey skirt was out for everyday wear. While my robe was perfect for at home, I had to leave the house occasionally for doctors appointments. When that happened, I turned to my maternity maxi dresses. I have this dress in three colors and it’s basically all I wore out of the house, or when people visited, for weeks. It’s soft and comfortable, looks like real clothes even though it feels like a nightgown, and it’s cut ideally for easy breastfeeding access.

My doctor clued me in that the perineal cold packs that were in my postpartum recovery bag at the hospital are also great for soothing an angry incision. When I got home and ran through the extras that the nurse gave me to take home, I found these, for a reusable option. They stay in the freezer and I wrap one in a dishtowel to prevent frostbite. Cold on the incision is key.

One thing for which I was completely unprepared was how much I would hate my normal underwear when I got home. I used hospital disposable undies for a while, but eventually, I wanted to feel like a normal, underwear-washing person again. I got these from Kindred Bravely, which are fantastic, if a bit delicate (some stitching is already coming undone on a few pairs), and when I went to order more, I tried these, which probably wouldn’t have worked for the early recovery days, but are great now that most of my immediate soreness is done. Seriously, wearing the wrong underwear caused a lot of my worst pain days after the initial healing period.

Now that I’m past the initial healing period, I’m still not wearing most of my normal clothes. I stick to soft-waisted bottoms, like yoga pants, wide-waistband leggings, and jersey skirts. I can’t imagine when I’ll ever want to wear jeans again, and I’m pretty sure I’ll keep my maternity skirt in rotation when I go back to work. But just shy of six weeks from the surgery, I woke up one morning and realized that I didn’t hurt at all. And since somehow pregnancy has made me sickeningly optimistic, I will say that the bright side of the c-section was that Dan was able to bond immediately with Elliot and I think it makes it easier for him to soothe El when he’s fussy.

I spent a lot of time preparing for the possible things that could happen during delivery, but the one thing I never planned for was a c-section. If I had it to do over, I would know to make sure I had the above things on hand (if I didn’t already have them), as a relatively simple way to make sure I was prepared for everything. And, seriously, that robe is awesome and I still wear it to and from the shower every morning!

3 thoughts on “My C-Section Recovery Essentials”