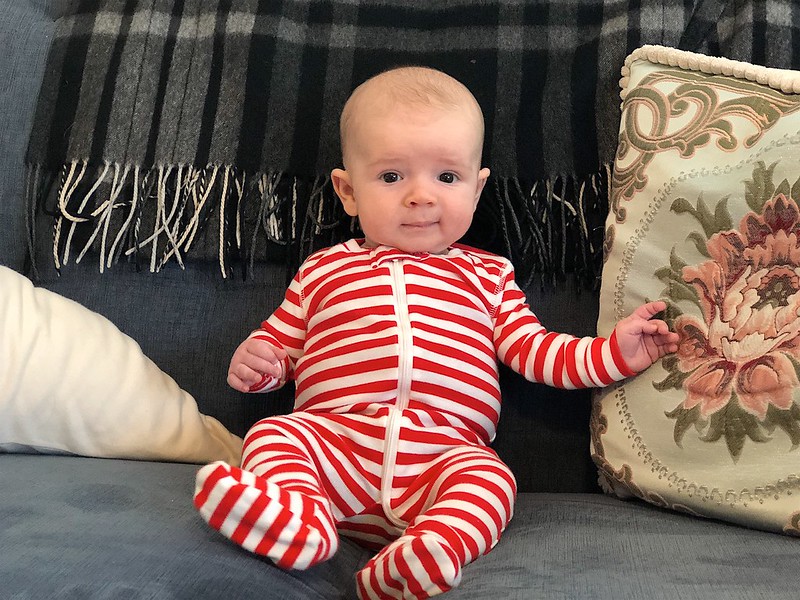 Elliot is three months old! We’re officially at the end of the so-called “fourth trimester” and I can definitely see it. Sadly, this also means that I need to start thinking about going back to work next month. I’m definitely not ready.

This month, I got back into my yoga practice and we started venturing out of the house more. I also got the chance to see how I deal with parenting by myself while Dan took some trips out of town. It’s nice to get out more and be able to take some time for myself during the day. It’s not so nice to have to do the bedtime routine by myself!

My incision is almost completely pain-free now, though it will get irritated by clothes or the occasional body product. I imagine that will linger for a while, but for the most part, I don’t think about my incision as much during the day. I definitely think about it while I do yoga, though, since I’ve noticed that I feel the pulling in my lower abs when I try to do back bending positions. So I’m taking it easy and listening to what my body wants to do.

Obviously, I’ve also been carving out more time for writing this month. There have actually been a few posts this month! Elliot is taking more predictable naps, which means I get a little guaranteed downtime during the day. Unfortunately, I sometimes don’t know whether he’ll nap for 45 minutes or two hours, but such is life. I generally try to prioritize getting a snack and a cup of tea first, and then use any remaining free time to decompress.

I will say, I’m not missing work at all yet (though I miss my coworkers a little). I know plenty of people are eager to go back to work and get a break from being alone with the baby all day, but I’ve rather been enjoying it. I suppose that comes with being a little introverted and more than a little lazy.

Also, Elliot started daycare this week. We were able to get a spot at convenient daycare, but they would only hold the spot until now, so we had to start paying a month before going back to work. So I figured it would be good to send him a day or two a week to get used to it (for both of us). He seemed to enjoy it, but I was a bit of a mess for most of the day. That said, by the end of the day, I was more used to the idea of him being at daycare, and realized that he was handling it fine.

El continues to grow and develop. This is our first month without a pediatrician checkup, but I can tell he’s getting bigger every day! He started outgrowing his 0-3 month clothes a while ago and has started officially wearing 3-6 month sizes!

He’s also doing great at tummy time, and even seems to be enjoying it for longer. I’m seeing a little personality shine through, especially when it comes to exploring new things. I had to leave him on the floor with a toy nearby when I had to go to the toilet a couple weeks ago, and while I was in the bathroom, I heard him grabbing at the crinkly leg of his stuffed dragon. He’s started reaching out and grabbing for things, and has definitely started trying to put more things in his mouth.

He has also started tracking things with his eyes. He’ll watch a toy if I move it back and forth while we’re playing, and he loves to look for me in the mornings when Dan is changing his diaper. I’m excited to watch him achieve these milestones and see his development!

I’m also noticing that he is starting to need more quiet and dark during his daytime naps. He stays awake longer when I take him for walks, and I’ve started taking upstairs to the bedroom for naps so he sleeps longer. I have my fingers crossed that this is the beginning of the so-called “four month sleep regression” and that we’ll have time to figure things out if he stops sleeping at night before I go back to work. Plus, we’re probably going to have to move him out of his bassinet sooner rather than later…