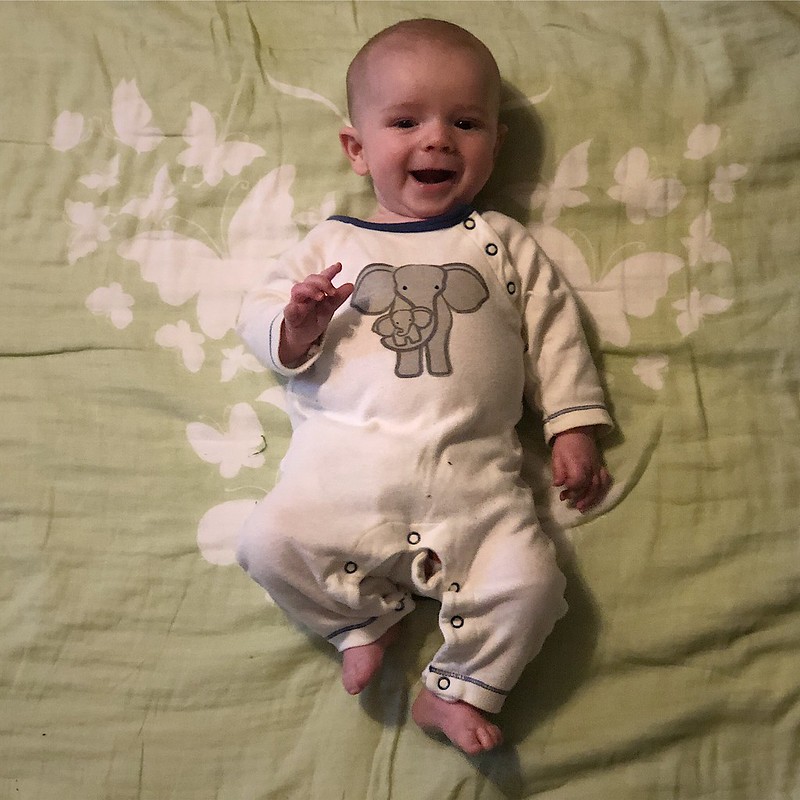 Elliot is four months old and continues to surprise us every day. He’s definitely growing into his personality and has developed a really adorable “serious look” when he meets new people. He’s also started daycare every weekday since I returned to work and seems to be having a blast.

Well, I returned to work last week and I have to say, the anticipation was much worse than the reality. I’ll be honest, I really didn’t want to go back to work, but since we’ve been paying for daycare for the last month, I couldn’t really afford to take off much more time. I was kind of a mess the weekend before I went back, but I knew he did well at daycare because we’d been sending him a day or two a week for the last month. That really helped my peace of mind as I wasn’t worried about him as much as just missing him. And being back at work has been great. I’m rediscovering how much I love my work and reconnecting with coworkers. Plus, so many people I encounter on my daily commute welcomed me back that I felt so missed and appreciated.

That said, I was dropped right back into the middle of our most hectic time of year. It’s our organization’s annual meeting and that means a lot of early mornings for me. Thankfully, I’ve done okay with my morning routine, and I’m grateful that Elliot has been pretty cooperative with his sleeping schedule so that I’ve been able to get out on time the last couple of days. I’m a little worried I’m going to crash before the end of the week, but for now, I feel like I’ve gotten through both the initial return and the busy period. Tomorrow, we take him to the pediatrician for his four-month checkup, which is a bit of a break for me because I won’t have to commute in.

The main thing that has helped me stay balanced during this transitional time has been my yoga and meditation practice. I talked a bit earlier this month about restarting my yoga practice last month, and this month I also restarted a regular silent meditation practice. Yoga helps wake up my body while meditation helps focus my mind. And when I started having some anxiety over pumping, I was able to use meditation to help relax.

Speaking of pumping, it’s only been a week, but so far I’ve been staying on top of Elliot’s milk needs at day care. Pumping is a weird break time, but it’s just become part of my new routine. And the hospital-grade pump my work provides is pretty awesome (I actually think I got a little too excited and may have set it a bit high last week, which caused some issues). I have my fingers crossed that that stays.

Elliot is generally a happy little guy. He’s still quietly observant of the world around him and loves to watch things happen. He loves watching me make my tea in the morning and is intently interested in the pour over coffee when we go to Vigilante Coffee on the weekends. He’s been going on more outings with us as we become more comfortable taking him out. We’ve been looking for a new house, so he came out to look at houses and we even stopped for lunch in a restaurant with him in tow with success.

He’s also started rolling over on his own, so pretty much all the time is tummy time. And he’s started playing with toys from his tummy as well as grabbing them while on his back. His physical development is really cool to watch and it looks like he’s already trying to figure out how to crawl (he can get his butt up off the ground and kind of does a little inchworm crawl). Dan and I are getting a little concerned that we need to start thinking a little more about how to keep him safe when he becomes mobile because that’s going to happen sooner rather than later. He also figured out how to get his legs over the edge of the bassinet, so we had to move him to a Pack and Play for the night while we ordered a crib!

Finally, Elliot and Sophie are interacting more. She’s become a little braver and more interested in coming near him to investigate, and he’s started reaching out to try to touch her and has become more interested in watching her. Luckily, she’s a very gentle and patient cat, so hopefully they make friends soon.