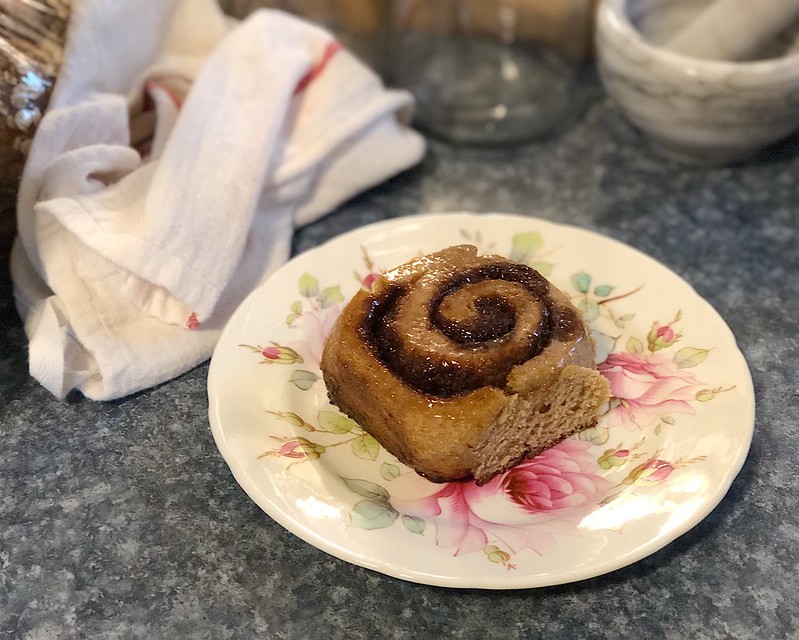 But first, every morning, before we could open our gifts, someone would have to make my mother a cup of tea. As it turned out, I was the one who remembered best how she liked it: Earl Grey, steeped for just a minute or two, with a quarter teaspoon of sugar. Then, we could coax our parents downstairs to open gifts (my father was very much a morning person, but my mother needed her cuppa before she was willing to rise so early on a holiday).

These days, I’ve tried to move from food being a preamble or postscript to gift-opening to more of the main event. As my relationship with Dan has evolved, we’ve started spending more time together in the kitchen and eating together as a part of our holiday traditions, rather than spending our time on material gifts. This year, as I mentioned, we didn’t exchange gifts between the two of us at all. But we still had a nice breakfast.

This recipe is based on the Molasses & Cranberry Cinnamon Rolls from Nourished Kitchen. Jenny’s recipe uses unrefined sugars and sprouted whole-grain flour to create a treat that is delicious and yet not as full of sugar and white flour as the average cinnamon roll. Then, I used Alton Brown’s overnight cinnamon roll method to proof the rolls because I like the texture it yields. I’ve tweaked the recipe just a bit to fit what I keep in my kitchen and what I wanted from the recipe (and to allow for Dan’s dislike of cranberries). And I made them with a mix of spices because I didn’t check how much cinnamon I had on hand, but they would also be delicious as just cinnamon rolls.

1. Make the dough: Mix together the flours, yeast, and salt. Warm the milk, butter, and honey until the butter melts and it comes to about body temperature. Beat the eggs in a separate bowl and stream in the warm milk mixture, beating constantly. Add the wet ingredients to the dry and mix until a dough forms.

2. Grease your hands and work surface and knead the dough until it’s smooth and elastic and doesn’t stick to things (about 5-10 minutes). Put in a greased bowl, cover, and set aside to rise for an hour or so.

3. Make the filling: Beat together the butter, salt, sucanat, and spices until they make a smooth paste.

4. Roll the dough out to about 1/3” in thickness, and roughly 12” square. Spread the filling on the dough and roll. Slice into nine rolls and place into a 10” square pan that’s been greased and lined with parchment.

5. Cover with plastic and refrigerate overnight.

6. The next morning, place the pan in a turned-off oven along with a pan of boiling water to proof for one hour. Remove the pan and the water and preheat the oven to 375F. Bake for 30 minutes or until they read at least 190F internally.

7. Make the glaze by melting together the butter and honey and brush over hot rolls. Enjoy! 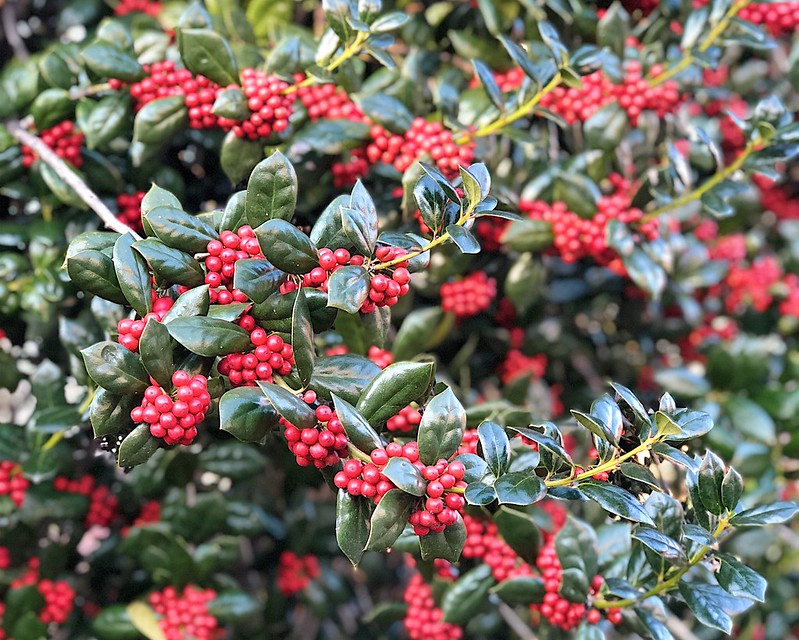 Well, we had thought this would be our first Christmas with a baby. Had my due date proven a more accurate guess, we would probably be in the throes of cluster feeding and sleepless nights still. But due dates, like the pirate’s code, are really more like guidelines, and here we are, waiting on our baby, fielding well-meaning inquiries from friends, and getting a lot of comments about having our own “baby Jesus” (for what it’s worth, I did suggest that if the baby came on Christmas, we’d have to consider using “Noel/Noelle” as the name, but Dan vetoed that.

We had always planned on this Christmas being a quiet affair with just the two of us. We hadn’t even planned on making the 20-minute drive to my mother’s house nearby because, if we had a newborn (and a recently-postpartum body, for me), there was little chance we were going to both put on real clothes, let alone leave the house. But the eerie calm-before-the-storm feeling of being overdue and alone together during Christmas wasn’t expected.

I’ve had quiet Christmases before, and Christmases without a large gathering, and even Christmases where we woke up on Christmas morning with just the two of us in our house. But somehow, this one feels different. We didn’t really have anything planned because the hope was always that I would wake up suddenly and be gearing up to give birth at any moment, so why make big plans for one specific day?

This year has also been a bit of a trial run for an idea we had for future Christmases with our child: gift-free. This year, we’re not buying gifts for each other and just focusing on spending time together on a quiet day off. Our hope is that in the future, we can make this holiday about spending time together and not about gifts, at least in our immediate little family. That way, we’re not adding our own excesses to the inevitable pile of gifts from grandparents.

So this year, we’re having a quiet day in, waiting patiently to see if I manage an eleventh-hour birth on my own before my scheduled induction later this week. I’m making a bit of a special breakfast because we need something to mark the day, and just generally trying to celebrate the return of sunlight into the world without as much to-do as usually goes on.