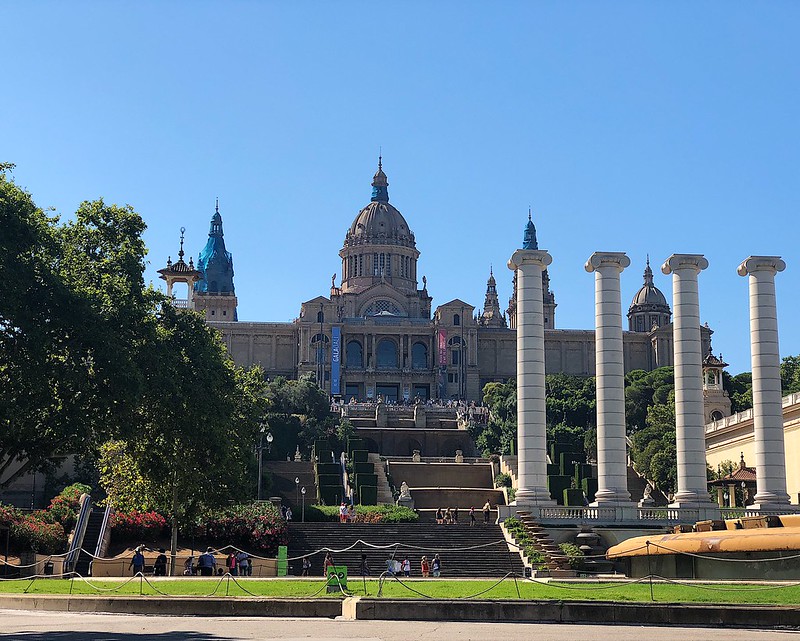 So as I’ve mentioned before, at the end of July, my husband and I decided to take a trip to Barcelona. It was sort of a babymoon, except that it was really for a conference that he was attending, so it was less of a tourist trip for him than for me. But since I’m kind of an introvert, having the days to tour around and see whatever I wanted without worrying that we weren’t leaving time for the things he wanted to see was a real treat. Of course, we planned the trip around the time I first found out I was pregnant, so there was a little bit of faith involved that I would feel up to traveling internationally, so I thought I’d talk a little bit about how we prepared and what my travel experience was like.

First of all, I made sure to purchase travel insurance. But I didn’t just purchase travel insurance. You see, most travel insurance policies don’t cover any issues related to an existing pregnancy, so if I’d bought my insurance policy before becoming pregnant, I’d be fine, but since I was already pregnant, they wouldn’t recognize a lot of issues (including doctor-mandated bed rest) as a reason to cancel. So I made sure to buy the absolute top-of-the-line policy, which allowed me to recoup 75% of my expenses if we cancelled for any reason. It was better than no protection at all, and it was only a couple hundred dollars extra. Compared to the couple thousand dollars I was spending on a plane ticket, I figured it was worth it.

Luckily, I didn’t have to use my travel insurance because everything went according to plan, in terms of my pregnancy! By the time I got to 18 weeks, I was consistently feeling not-nauseous and was confident I would be able to survive not only the 8-hour-each-way flights, but also a week away from home. Other preparations I made for the trip were having my doctor print out all my pregnancy-related medical records to date, buying some compression stockings, and researching tap water safety in Barcelona (it’s safe, but some people find it icky because it has a high mineral content). Before I knew it, we were heading to the airport!

We were lucky that all our flights were on time and we had gotten direct flights both ways. On the way out, I didn’t bother seeing if I could board early, but on the way home I did, and that was even nicer to be able to board, get settled, and even use the bathroom once before everyone piled onto the plane. The flights weren’t terrible, although on the way out, it was a little rough at first and I did take a Dramamine. But a few movies and a short nap later, we were in Barcelona! I managed to have to pee before getting in the customs line, and another flight came in while I was in the bathroom, so we ended up at the end of a very long line, but the employees were really good about shuffling me further ahead in the line so I didn’t have to wait as long. The customs agent even yelled at my husband (because he speaks Spanish) that he should have said something sooner.

The week in Barcelona was excellent. I walked a lot. It’s quite hilly in places, but I made sure to bring lots of water and take breaks when I needed them. My one tip is to buy sunscreen when you get there because you will need a lot of it and it doesn’t fit in a carry-on bag. It was nice to only have carry-on-sized luggage while we were going to our hotel on the first day. I also found that the people in Barcelona were incredibly helpful and understanding of not speaking Spanish or Catalan. I had tried to pick up some of both languages, but my pregnant brain just feels mushy while trying to learn languages right now, so I picked up most of my Spanish (and a tiny bit of Catalan) on the fly while touring around by myself during the day. By mid-week, I could easily order food and converse with the hotel receptionist!

Oh, and of course the best part about Barcelona was the food! Other than not drinking alcohol (I had the occasional sip of my husband’s) and not eating raw meat/egg/cheese, pregnancy didn’t really affect what I ate. I ate more vegetables and seafood that I had in the previous four months! The tomatoes, in particular, were amazing everywhere I had them. We even had a lunch at a restaurant owned by a famous chef, where we had our meal hand-selected with the waiter to make sure I could eat everything, and it was amazing. He even checked with the chef that the house-made feta cheese was made with pasteurized milk (which it was!).

I would love to go back to Barcelona. I feel like I saw a tiny fraction of what the city had to offer, despite being busy most of the day, and I’d also love to go back when I can drink wine and eat jamon! But I am so glad I decided to go with Dan to see the city instead of worrying that I wouldn’t enjoy it. I felt great — I think I felt better after a week in Barcelona than I did before we left! And it was an experience I will always remember.