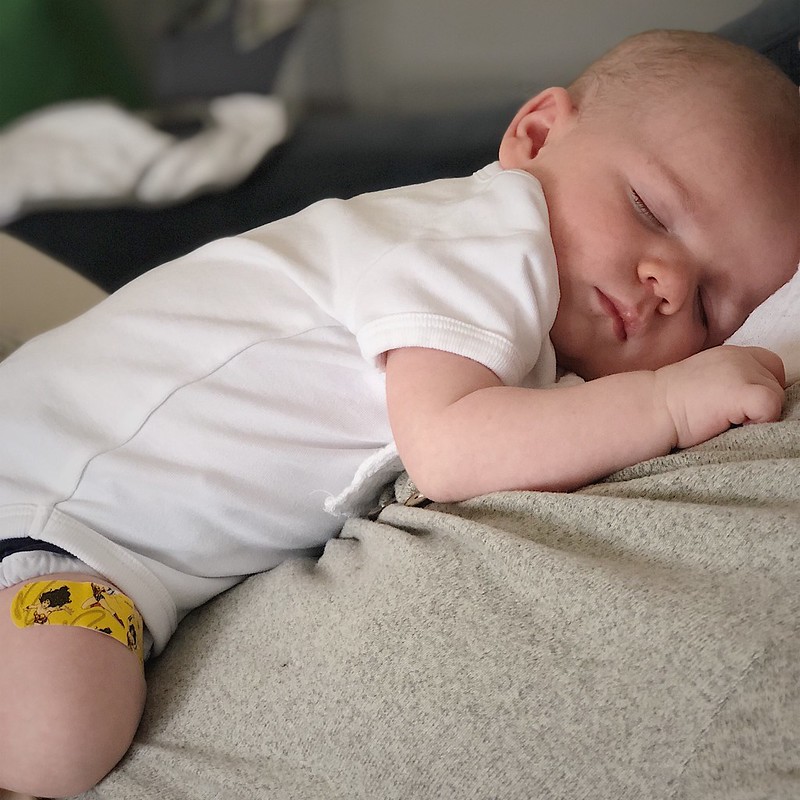 Elliot is two months old! He got his first major round of shots yesterday at his two-month appointment and he handled it pretty well (although the nurse who gave them was a total ninja and I could have sworn I only saw her give one shot!). He did cry a lot at first, but a little nursing helped and he was just a little fussy later in the day. I had planned for lots of fussiness, so we spent most of the afternoon snuggling. And he got that awesome Wonder Woman bandage (the other leg has Superman).

I’m doing okay with the whole taking-care-of-a-baby-during-the-day thing. Last week was nice because Dan only had to go to work two days (he had off Monday and Wednesday for a holiday and snow, and had already planned on taking off Thursday for a dentist appointment and some other things), but this week we’re mostly back to the routine. I actually had my first excursion out without Elliot since he was born. I went to the dentist on Wednesday while Dan stayed home with him. Apparently, he mostly just napped and then woke up to have a bottle right before I came home. I was a little worried, but the amount of work Dan has put into helping care for El when we’re both home left me totally confident he could handle it.

Now that breastfeeding is more established, we’ve started introducing bottles of pumped milk in preparation for when he officially starts daycare later this month. The spot we got in the daycare started a month before I go back to work, so we can ease into it, sending him one or two days a week to get used to it, but the one thing is that we want to be sure he’s comfortable with the bottle before then. So I’ve been pumping a little bit between feedings to build up some extra milk to give him for one feeding on days when Dan is home, and then I pump while he feeds El. So far so good, but who knows what will happen to my supply when I’m actually back at work and pumping for at least three feedings per day.

Therapy has been going well. My therapist has even checked in on me via email when she knows something stressful is coming up. And my OB gave me a very low-dose prescription for Zoloft, which I’ve been taking for two weeks now. It’s not clear that it’s helping, but at least the initial side effects only lasted a couple of days. I’ve been feeling a lot better lately, mentally, and it’s probably some combination of the treatment and just feeling seen and supported.

El continues to grow and develop and it’s adorable. He’s sleeping well at night, and we’re currently working on naps. We set up a Pack ‘n Play in the living room so he can nap in a separate area from his play area. He can do half-hour naps with no problem, but longer naps remain mostly elusive (although he napped for an hour after his shots yesterday). But I’ve heard that no matter how well they start sleeping early on, it all changes at four months anyway, so I’ve been pretty relaxed about letting him nap in the ring sling or on me.

He still tends to get fussy in the afternoons and wants to be held a lot, so the ring sling has been a lifesaver for me. I’m getting more confident with him in it by the day, and even made part of dinner the other night while wearing him. This week we haven’t gotten any walks in, but we try to take a couple walks per week at least most weeks, which he appreciates until he falls asleep.

He’s also discovered his hands. The other day when he woke up from his nap, he wasn’t fussing, so I let him stay in the Pack ‘n Play for a little bit and when I looked in, he was just examining his hands. He’s also started “talking” a lot, making “boo” and “goo” and “gah” sounds. He also says “ow” a lot, which I like to think is the sound he thinks his mumma makes because I did say it a lot in the first month of my recovery.

Other than that, we’re just hanging out most days. We still play and “chat” and do tummy time a few times a day, plus he likes his Montessori mobiles. And I try to read him a story at least once a day. He enjoys being around people, especially his parents. Now that he’s gotten his first round of shots, and it seems like flu season is calming down, we might start venturing out of the house more.

As far as his doctor’s appointment, the doctor said he looks great and healthy and very alert. His weight gain has slowed down a bit, but she’s not concerned, especially since he’s still gaining, and getting longer. He’s probably just going to be tall and thin like his parents (especially his dad!). And we even managed to get him weighed without him peeing on everything and everyone this time!